I’m a member of a cult.  The cult of busy people.

It feels great to be a member of this group.  As I rush through the office or the grocery store I imagine people thinking, “someone THAT busy must be really important!”

Finishing twenty low priority tasks in a day feels good but that one really important one gets skipped.  I can’t figure out why I always get those quadrants mixed up, but it explains why my burn pile is looks great while my rear faucet has been leaking for two years.

Tim Ferriss likes to differentiate between efficient and effective.  Efficiency is doing things right; effectiveness is doing the right things.

In my experience, the “right things” are the things I’m putting off.

Anonymity and faceless communication emboldens us all.  We say things online that we would never say to someone in person.

Has there ever been a case of an argument on social media leading to positivity in the world?  How many rabbit holes have we all gone down and regretted ever reading the original thread?

The next time you’re tempted to respond to a snarky comment or correct someone, remember this beauty from George Bernard Shaw:

“I learned long ago, never to wrestle with a pig. You get dirty, and besides, the pig likes it.” 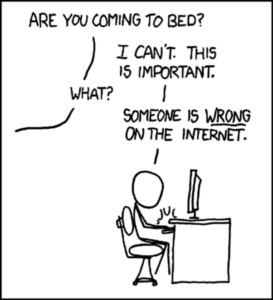 What does it mean to win an argument?  To outwit, out-logic, or out-word your opponent?

I suggest not.  Let them have their say.  Acknowledge their view.  Tell them you’ll have to think about it.

Taking your ego out of the equation lets you look at it from all the angles to pick the correct side afterwards.  Winning isn’t a matter of you versus them.  It’s a matter of the getting to the right answer, whether it was originally yours or theirs.

Winning every argument is easy.  If you’re willing to lose it first.

Early in my career I felt I wasn’t contributing fully if I didn’t give brutally honest feedback.

Even if I was wrong, I felt it would lead to a good discussion and ultimately serve the company.

These conversations were always hard with one boss in particular.  He would rarely take the advice.  When he did, it was tweaked and presented as his.

I now understand he didn’t want honest feedback.  He simply wanted me to echo his position.

Being happy at work depends upon understanding your role and your boss.  Sometimes she just wants a yes man.

This might be right up your alley.  If not, it’s probably time to find something else.

US Navy Seal David Goggins grew up bullied by his father and classmates.  He was poor, friendless, and basically unloved.

His youth was spent in misery until the day he realized that no one was going to help him.  He had to become hard.  Harder than anyone.

Since then he’s finished some of the most challenging military training in the armed forces and numerous ultra endurance races.

Say what you want about him – he exudes bravado and talks with excessive profanity – but he has found a way to be his best.  (Listen to him on the Finding Mastery podcast)

There are times in life I feel like I’m living clean and purposeful.

And then I find myself mindlessly eat a box of girl scout cookies.  Or realizing that’s it’s been two weeks since I’ve gone for a run or had more than seven hours of sleep.

I’m learning that what they teach in meditation is how I need to approach life.  When focus slips and my mind wanders, I need to notice it, reset, and refocus.

We never entirely banish our demons.  The best of us merely learn to live above them.

Is anyone else finding it harder and harder to avoid their cell phone?

Spare moments – at first wake up, in line, in the bathroom, at red lights, and of course before bed – are spent checking Facebook, Twitter, Youtube or google news.  And I’m finding it increasingly difficult to avoid commenting on meaningless arguments online.

I didn’t used to be this bad.  A big part of it is the news cycle.  I’ve never been interested much in politics until the most recent election.  The constant deluge of scandals and outlandish quotes combined with the quick dopamine hit of social media seems to have beaten back my self control.

I know none of it matters.  None of it is under my control and none of it affects my life in the least.

Maybe the steady stream of sound bites eliminates my need to process any of it.  Thinking is hard and the internet is easy.

Maybe my human tendency toward choosing a side is attracted to polarizing articles.

Whatever it is, here and now I’m making a vow to stop consuming so much.

I vow to create more.  That means thinking and writing, business and play.

When I consume, I vow for it to be though books.  Preferably older books.

I vow to avoid mainstream media.  In its place, I will read from authors whose words don’t appear to be controlled solely by their politics, clicks, or sponsors.

Marcus Aurelius said, “Don’t waste time arguing what a good man is.  Be one.”

There are a lot of people that need to take this advice but the only person I can force it onto is myself.  And so I start today.

There’s not enough time to do everything we’d like.

Work, sleep, socializing, exercise, family, and so on.

So why exactly are you training?  What’s your goal for this year?

The person in the mirror is the only one you’re guaranteed to have for life.  Live up to their expectations.

You owe it to them.

Relative to the bulk of human history, we have it extraordinarily easy.  Public services, health care, warm homes, cheap food.

So why are we all so busy and stressed out?  Sure, the quick access to work and surfing via smartphones means we can be “on” 24-7.  But is any of our stress due to truly life threatening reasons?

Do you know an athlete who always has some type of injury no matter how much they’ve been training?  Maybe the better question is how many of these athletes you know.

Let’s take another approach.  Look at it in reverse.

What kinds of problems would your brain invent for yourself if you truly had nothing to worry about?

How frightened might we be if others could see into our minds.  To know our secrets, our fears, our fantasies.  To know how peculiar and strange we are.

It’s a bit ironic though.  Take middle school gym class.  In your first group shower, we’re worried everyone is going to be looking at you.  But of course everyone is thinking the same thing.

By and large, we all have the same hopes, dreams, and fears.  We aren’t special snowflakes.

Alain de Botton, renowned author and philosopher, says we’re all a little bit crazy and struggling to keep it together.

I think he’s on to something.  Some of us just hide it better than others.

PS – Listen to this podcast for more on Alain’s thoughts.  It’s a good one.  And this book for what should be required reading before anyone gets married.

In a nutshell, we often rely too much on initial information when making subsequent decisions.

It happens when we’re shopping, arguing with our kids, and scheduling our day.  The best example is a high end jewelry shop where pieces are marked up to extravagant prices.  When they put the pieces on sale, it’s hard not to assume you’re getting a deal even if they are actually worth a lot less.

Great negotiators will always lead with an outlandish first offer, knowing that you will adjust your response based partly upon that offer.  You were going to ask for a $5,000 raise at your evaluation and your boss offers you $1,500.  Do you still ask for $5,000 or do you come back with $3,000?

What’s the best way to get increased national security when you’re working against a liberal majority who don’t want to give an inch on the issue?

Put out a big, scary Executive Order up front and get everyone in a state of panic. Then gradually scroll it back *to your original policy goals* and watch them grudgingly (some happily) accept it.