Write at least one joke per day and put a big “X” on the calendar for that day when done.

His only job is to keep the string of X’s going.  To not break the chain.

I’ve been slacking on weight lifting this year but I follow every single run with a series of strength exercises to at least get something in.

About half the time I really don’t want to do it.  I know it’s going to protect me from the miles and it helps come back from minor strains faster.  But that isn’t enough to talk me into it in the heat of the moment.

The main reason I do it is because skipping today makes it twice as easy to skip tomorrow.

Do you know what I hate most about myself?  I care too much what everyone thinks.
I remember dreaming of being a pilot as a kid.  I wanted to race jets across the sky.
These were the carefree days of youth.
When I got a little older I told adults I wanted to be a paleontologist because it impressed them.  When they would ask I would get so excited to see their astonished looks at a young boy pronouncing such a big word.
I think this was a turning point in my life, a point where I made decisions based upon how I would appear to others.
I think it was the loss of my innocence.
My grandma, who passed, never gave a crap what people thought.
Maybe I can get that back too one day.
What did you want to be as a kid?
Did the decision ever take money into account?  My guess is it was a lot more about fun than cash.
I hate how money pulls at me.  If pressed, maybe a lot of us would trade a good chunk of our income to get rid of responsibilities and have more time to do things we like.  Why don’t we make that choice up front though?
It’s like the story about the Mexican fisherman.
There’s something so seductive about money.  I’ve heard it described as second only to sex as the richest metaphor.
Do you know the minimum amount of money you need to live?
I don’t.
When you don’t know how much money you need to live, the answer is always “more”.

I recently raced the Pike’s Peak marathon in Colorado.

If you’re a runner you’ve probably heard of this epic race.

Wait?  Did I say run?  It’s actually more like a run-walk-hike-scramble.

And with oxygen levels 43% lower than sea level, the miles spent above 10,000 feet were kind of like being drunk without the euphoria.

The race was epic in every sense of the word.  Amazing views, great production, fantastic swag and volunteer support.  I can’t speak highly enough of it.

But the race wasn’t the best part of the weekend.

The best part was nervously planning gear and race strategy with friends the night before.  It was slapping high fives with other friends at mile 5 because they woke extra early to hike up and support us.  It was recounting every detail over burgers and a beer that evening.   It was seeing so many well wishes from friends on Facebook.

It’s the shared experience of racing with friends. 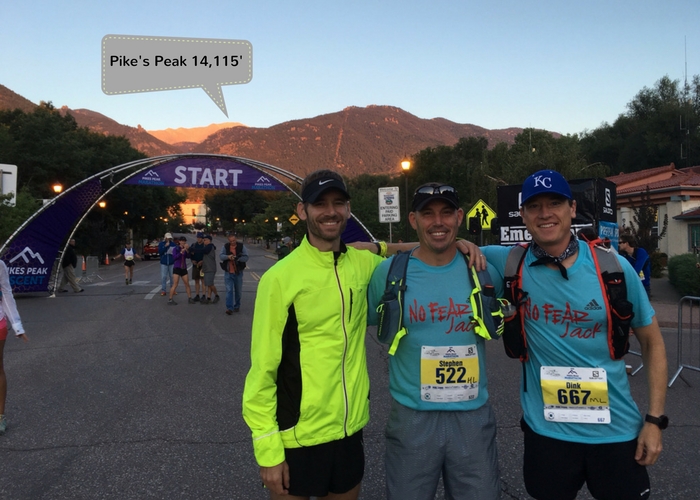 I like reading books where they ask old people what they regret about their lives.

The answer is always the same.  It’s rarely about things they did.  It’s almost always things they were too afraid to do.

Quit their job and pursue their passion for painting, divorce a spouse they didn’t love, explore the world.

It occurred to me today reading an airline magazine that I’ve never been to Europe.  I always assumed it would happen sooner or later.

And where’s that book I’ve been talking about writing for years?

It’s time to make some plans, people.  Wouldn’t you rather do some of these things while you’re physically and mentally strong rather than with a walker or dementia in 40 years?

I don’t recall who said it.  I think it was a mountain biker, but I like it.  She said her life motto is “Be brave.  Do epic shit.”

What epic shit do you need to get started on?

I’ve got white boards and notebooks full of them.

But goals are wispy things.  Mere possibilities.  When things get tough goals are useless.

Hard work, on the other hand, brings mental and physical strength.

There’s an old saying: Training never gets any easier.  You just get faster.

And let’s face it, life never gets any easier either.  Your next obstacle is just around the corner.  When it comes, are you going to be ready?

The Greek Archilochus said it best 2500 years ago:

I donated to Missouri State University ten years ago but don’t want to donate to them any more.  I’d rather give to other local charities.  But they still call twice a year and it’s forever to get off the phone without being rude.  I hate it.  HATE it.

Kiva allows people like you and me to make micro loans to people all over the world.

These loans (0% interest) might help pay for a new grill for a woman in Mexico to cook and sell tamales, a man in India to make shoes, or even a group in Vietnam to buy medicine to resell.

The repayment rate is 97% which means if I get my money back (highly likely) I can use it to fund someone else.   It’s charitable recycling…my dollars get to help people over and over.

That’s all great, but the genius is they make giving FUN.

You get to pick the category of donation…women, health, business, etc.  Then you get to read the story and see a photo of each person requesting a loan and pick your favorite. 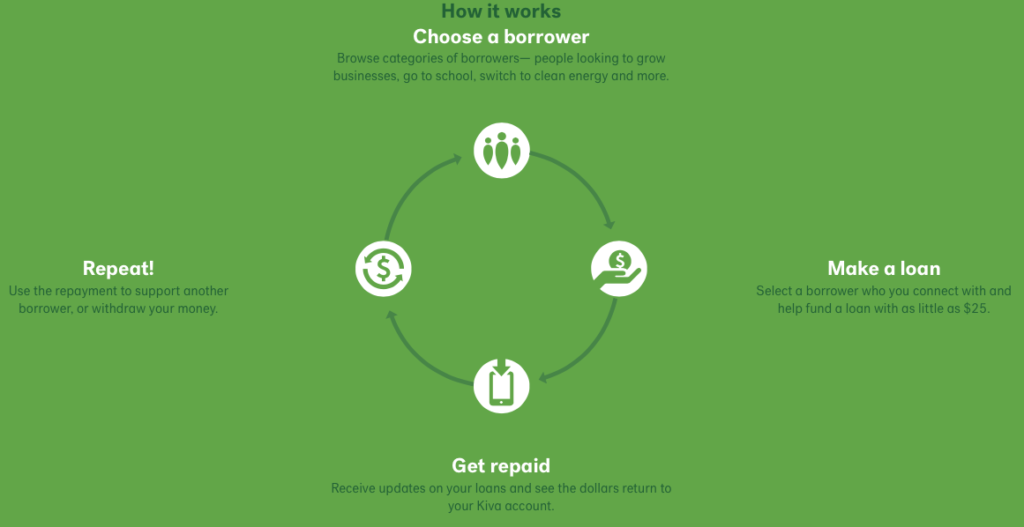 For the first time in my life, I’m looking forward to giving not out of a sense of obligation but because the experience is so great.  How cool is that?

Half of the world lives on less than $3 per day.

I am the 1%.  If you are reading this you are too.  We forget that Americans in poverty are still richer than most of the world.

Even if everything else is going wrong in our lives, that’s something to be thankful for.

My wife and I donate to several charities but I wanted to do one small thing today to help someone less fortunate far away.

What small thing can you do today to help someone less fortunate?

In Ego is the Enemy, Ryan Holiday describes how Ulysses S. Grant moved from one of the greatest U.S. generals in history to one of its most mediocre presidents and failed businessmen.

In the Civil War, Grant’s tactics, humility and resolve were in large part responsible for the North winning the Civil War.  He retied with the fame and respect of a nation.

He was set for life after the war but wanted more.

After the war Grant changed direction and pursued the presidency of the United States.  The administration was marked by corruption.

After his presidency, he partnered in an investment company that turned out to be a Ponzi scheme.  Grant was bankrupted and would have left his family penniless had he not finished his memoir a few days before dying.

Like Grant did, I almost always make bad decisions when my ego is involved.

In 2003, I tried to run through an injury because I really wanted to win a big local race with a cash payout.  The resulting injury still bothers me today.

I earned a master’s degree in Public Health because I thought it would pay well and give me respect.

One month out of college and into the job and I realized I hated it.  I had wasted the previous three years.

I jokingly tell people never thought I would turn out to be Al Bundy, selling women’s shoes all day long.  But it feels great to help people.  This gives me a sense of purpose.

When we’re struggling, sometimes asking how we can serve others (instead of ourselves) leads to the best path.

What are you struggling with right now?

Pain is a fact of life.

We will have major physical injuries.  Our spouses will get fired.  Our parents will die.

There’s nothing wrong with feeling this pain.  But an extended focus on the pain only makes it worse.

I’ve been extremely frustrated recently with a project I’ve been working on for many months.  I thought I had been hiding it pretty well until a friend told me the other day, “wow, you look really stressed.”

I suddenly realized that I’ve been allowing frustration to control me.

Victor Frankl was a concentration camp prisoner in the second world war.  The Germans killed his parents and pregnant wife in the camp.   The beat and humiliated him every day.

The only thing they couldn’t control was how he responded to their treatment.  He knew that if he could control the space between their actions and his reaction he could retain some sense of freedom.  This ended up being how he survived.

Almost none of us will experience the sort of trauma Frankl experienced.  But so many of us, including me, allow ourselves to be ruled by frustrations, fears, and anger on a daily basis.

My project?  If it works out, great.  If not, I’m going to do another one just as exciting.

Pain is inevitable.  Suffering is optional.