I wasn’t good at many things growing up.  Sometimes I felt like my one true gift in life was running.

I was like Forrest Gump.  I’d run to get the mail.  Home from school.  In jeans or dockers.  My neighbors thought I was crazy.  Racing circles around our back yard with my dog after school.   I was the worst soccer player you ever met – no skill, falling all the time – but I could play all day long.  And outrun everyone late in the game.

On the second day of my freshman year of college, I joined in some games of pickup basketball with these tall black guys (man, sometimes I wish I was a black guy!  So athletic and so cool!  Totally opposite of me).  I don’t think they were on the college team but they were good.  I was terrible but I lasted four or five hours.  Finally I had to quit when all the muscles in my legs began spasming uncontrollably.  I actually crawled part of the way back to my dorm room.  But I never got tired.

Steve Prefontaine once said, “Some people create with words or with music or with a brush and paints. I like to make something beautiful when I run…It’s being creative.”

That was exactly how I felt.

It takes twice as much effort to go the same speed.  I’m like a man who has lost 90% of his vision.  Thank god for that last 10% but it’s still painfully obvious what’s gone.

We all eventually slow down.  Sometimes due to age.  Sometimes injury.  It doesn’t really matter why.  Neither reason makes it any easier to accept.

Did you know that your body turns over nearly every atom in your body every five years or so?  You get a new suit of skin every couple of weeks.  A new liver every six weeks.

The body you have today isn’t the same one in old photos.

The smiling lady in your 5K or marathon PR post race pic?  Maybe not a stranger, but definitely not the lady in the mirror.

Why should we expect to be able to perform the same today as we did five years ago?

Why do I continue to hold out hope that one day I’ll get past my injuries and make a run at my 5K PR?  That was fourteen years ago!  My training partner and I were rocking out to Ricky Martin on the way to races, if that gives any perspective.

[Fun Fact: After the race we’d go home, break out my trumpet and his trombone, and play and dance along to She Bangs in our underwear.  Then at night we’d go to a bar called Cowboys 2000 and he’d try to teach me how to dance and pick up girls.  I never succeeded in either.  But we did have some great footraces in the parking lot at 1am]

If you chart the best times for the fastest sprinters in history, all of them ran their fastest times in their early to mid 20’s.  Gatlin can’t understand why people are suspicious.  He’s now running faster than he did when he was younger and on drugs?!  No way.

I don’t think it’s hard to understand we’re going to slow down.  It’s a fact.  Facts are easy to know.

But some facts are really hard to accept.

Others have started using the WAVA calculator.  This calculator is a way of comparing your current running times to those of your prime.  Kind of like a golf handicap.  We can even compare men and women of different ages in the same race.  Here’s an example:

So Bill runs almost four minutes faster but Kate has a better adjusted time.  That is, she performed better relative to her age and gender.   Some races even give out awards based upon WAVA times.

Another fun thing to do with WAVA is to plug in your race times every year.  Despite slightly slower times, you may actually have relatively “faster” performances as you age.  For a goal oriented person faced with a slippery slope of decline, you can still have something to train for.

Maybe I should stop longing to go back to the good old days where I could cruise through a mile in under five minutes without too much effort.

Would I even want to go back to that person?  Cocky, self-centered, a know-it-all.

I remember talking to my training partner at the time about some older runners in the local running club flirting with 3 hours in the marathon.  These were truly great times for guys in their 50’s.  He wondered if we could do it.  And I said that if I couldn’t run a three hour marathon untrained I would kick my own ass.

If I could go back in time, I should probably go back to my 7th grade self.  The smallest kid in the school, afraid all the time, who would let anyone copy off of his test for friendship.  The kid with a crush on Kendra from math class.  Kendra, who told stories about her and her boyfriend licking each other’s eyeballs.  Wow, that sounded so cool.  I wanted to lick someone’s eyeballs!

Or maybe I should go back to my 18 year old self below.  Still pretty much a complete dork.  That Eric really liked MC Hammer. 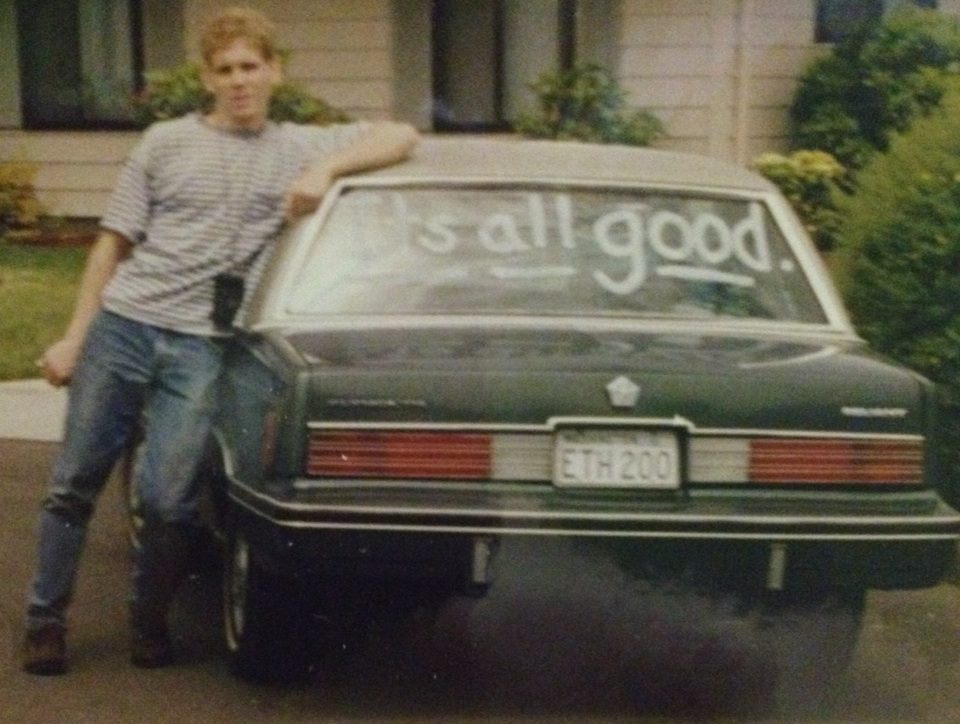 For me, the running slowdown is a metaphor for dying.  I think that’s why it’s been so hard for me to accept.  Dying scares me more than anything.

I remember the first time I actually thought at length about my own mortality.  I was probably ten years old and had an intense panic attack.  I still have them when I think about it.

The first time I found out I had gray hairs was 7 or 8 years ago after shaving my hair off with clippers outside.  I went to clean it up the next day and genuinely thought my wife was messing with me.  I thought she put a bunch of gray hairs in the pile.

Turning 40 next year doesn’t bother me.  I can’t wait for the next age group.  But gray hairs bother me a lot.

This is my new body.

How about you?  How do you cope with slowing down?

4 thoughts on “My New Body”