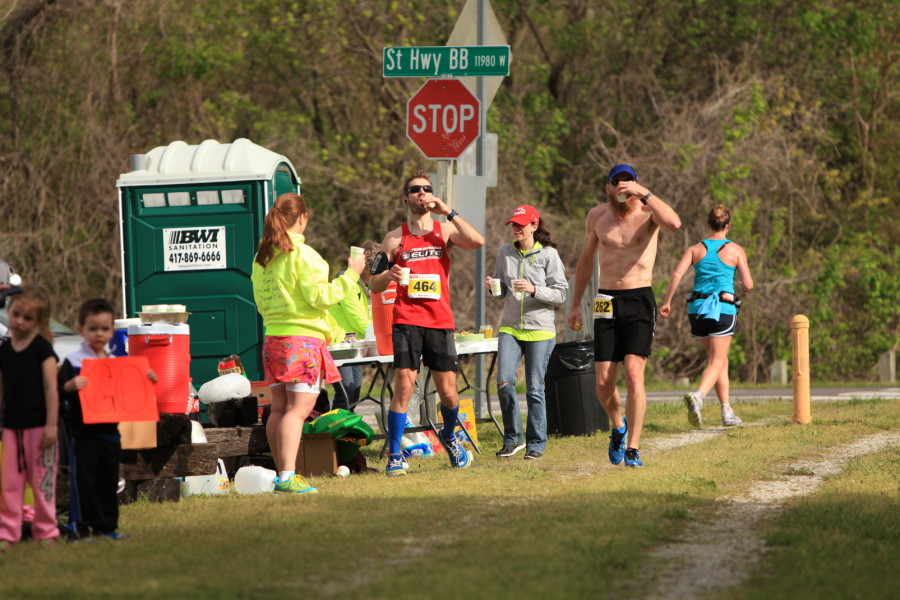 I ran the Frisco Marathon last weekend and walked 14 times in the last three miles.

You can say it didn’t go as I’d hoped.

When the line goes down it means you’re not running. That’s a lot of *not* running at the end

It’s tough to be upset.  The race was really well organized.  And it was fun doing it with so many friends.

Four friends pulled me aside beforehand.

When the race got tough, these were the people I thought of.

I’m still trying to figure out what went wrong though.

On the bright side, I didn’t cry or poop myself once.  #winning

I did leave a present buried off trail around mile 11 though.  Sorry Ozark Greenways!

In my defense, the 10 mile aid station porta potty was right next to the female volunteers.  Maybe five feet from them.  I was faced with a choice.  Make some very bad noises in front of girls – or “hold it” until the next one.

There was really no choice.  Which is funny because it would have been fine if the volunteers were male.  Heck, I might have even tried to make more noise.  We’ve all been in a quiet men’s room that suddenly erupted into laughter after a really good fart.

I know a lot of the 50K and 50 milers were throwing up due to the heat.  It got warm for this time of year.  74 degrees I think.  Which doesn’t seem that bad unless you’ve been training in 40’s-60’s temps.  And you’re running further than most people drive in a day.

No one ever said runners were smart.

I like to recount the story of a time a friend asked my wife if she was a runner.  He was in awe of some race I’d done.  With a smirk on her face she said, “No. I play real sports.”

We all need someone to keep our ego in check.

I think I’ve narrowed my blowup down to two possibilities: nutrition or long runs.

I use Generation Ucan.  It makes my stomach less “angry” than anything else when I run.  I swear by the stuff.  Before Ucan came out, I used to eat Honey Stinger chews in races.  They are the best tasting fuel on the market.

One time on an Ironman bike ride I ate 100 of honey stingers.  Too much sugar.  I thought I was going to barf around mile 90.  I was giving them away left and right to other racers. Even looking at this photo from race morning makes me queasy. 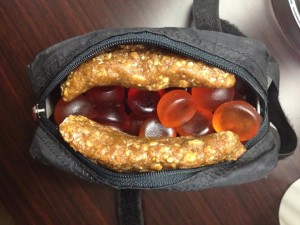 The plan last weekend was to take drink my Ucan twice – at 70 minutes and 140 minutes into the marathon.

The first serving went as planned.

But the Ucan was dried and stuck inside the bottle bottle for serving #2.  And I was with the race leader at the time (header image).

I had been using him as a draft from the stiff crosswind for the previous two miles.  In the heat of the moment, losing the draft truck sounded worse than skipping fuel.

This is where a woman would calmly stop, fill the bottle with water, shake it up, drink, and get back to running.  She’d lose maybe 30 seconds but she’d be fueled.  Women are smart.

Not a man though.  Not this one anyway.

I tried to unscrew the bottle but my hands were too slippery and sticky.  So I drank some water from a volunteer.  And then tried to spit it into the hand held bottle through the nozzle.  Which of course just sprayed water and Ucan slime everywhere.

I finally gave up and made a dash for the leader.  This is probably the moment where he spotted weakness and dropped the pace because I couldn’t catch him.

I did three runs in training…16, 18, and 20 miles.  These were my three longest training runs ever.  The last few miles of each of them felt awful but I got them done.

My new logic: if you are suffering at mile 17 into a 20 miler, your body might adapt to run 20 miles strong next time.  But running 26 solid miles requires longer than 20 in training.

I think a maximum long run of 20 is the way to go for beginners who simply want to finish.  Stopping at 20 is a nice balance between lower injury risk enough mileage to get you across the line.

So next time I plan to do a 24 miler.  Maybe even 26.  I’ll probably do more walking in that long run.  I’m thinking it’s more about “time on your feet” than running 24 miles straight.

I will probably not take Anthony’s advice.  He suggested “an 18 mile warm up followed by a 10K race.”  He says this will simulate running the last 10K on tired legs.  My issue with his suggestion is that 18 miles should never qualify as a warm up for anything!  I don’t think ’18 mile’ and ‘warm up’ should be used in the same sentence.

I’m desperate though.  I may try this.

I did do some things really well in the race.

With the exception of that bottle, my race gear, apparel, and shoes all worked great.

I made a document to help me plan out the last week of the race.  It’s kind of a check list to keep me from doing (too many) stupid things.   It also keeps the stress level down on race day knowing you have everything.  I really like it and plan to use it for important races going forward

If you’re curious what my sheet looked like for this race, here it is.

Looking back to when I was young, I realize racing came too easy for me.  I didn’t appreciate it.  Fast times and winning races are kind of meaningless if you don’t have to work very hard.

I suspect this can be broadened to life in general.  Not one of us really appreciates how lucky we are until we get sick, disabled, or just plain old.

One of the items on my checklist is to express gratitude before each race.  I pulled this idea from a book I read by James Altucher called Choose Yourself.  It’s one of my favorite books of all time.  You should read it.  He writes about expressing gratitude as one of his four daily steps to staying mentally and emotionally centered.

At first I thought it was kind of foofy.  But then I did it each day for a week and I found that it relaxed me.  I still have as many those little stressful things in my life, but they stress me less.  It also reminds me that I’m really lucky to just be out there.

No matter if you are slow or fast, winning races or coming in last, merely having the ability to walk or run is a gift.

I see that a lot more clearly now.