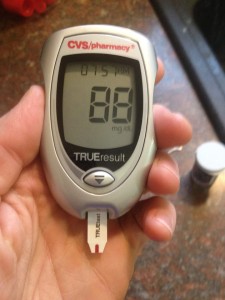 The 2012 Bass Pro Marathon was my first “real” marathon and boy was it a wake up call.  I never would have expected to positive split the race by almost 30 minutes and to find that my sprint speed at mile 24 couldn’t keep up with the grandmother who was passing  me!

Having completed three Ironman Triathlons up to that point and a strength in running, I felt confident that I’d be able to complete the race with minimal problems.

Sometimes overconfidence can be our undoing.

Several factors played a part in my massive implosion at this marathon.  I had a great base going into the fall but took the 8 weeks off before the race to recovery from the Redman Full Triathlon.  So long runs were certainly missing.   I also paced the marathon incredibly poorly (more on this in a future post).

But probably the biggest factor was a lack of calories.  I like to think of myself as a smart person but I guess we all make bonehead errors from time to time.

I ate a normal breakfast but chose not to carry any calories with me.  My good friend Megan asked me at the start, “what are you planning to eat then?”  I shrugged and said it would work out.

Excited by a quick early pace, I became very overconfident.  I crossed the 13.1 split in around 1:34 and was feeling on top of the world.  Dumb dumb dumb.  Oh how the mighty can fall!

Over the next few miles the monkey started to jump on my back.  I took some sport beans at an aid station but they seemed to have no effect.

By mile 20, I was struggling to avoid walking.  By 24 I was walking and running.  Each mile became worse and worse.

By the time I finished, I felt like a corpse.  Sights and sounds were blurred and my stomach ached for food.  A quick bowl of rice and chicken quickly brought me back into the world.

Implosion complete.  It was, as they say, fugly.

This race was the first time I became truly curious about how calories impact running performance in a race.  I began asking myself a lot of questions:

I finally got around to purchasing a Blood Glucose testing kit in February of this year (2015).  Knowing nothing about the various brands and models, I picked one priced in the middle at my local CVS and went home to experiment.

I didn’t have a specific schedule for testing.  I just started taking measurements at various times of day…mornings before breakfast, following runs, mid day after eating, and evenings.

So far, the pattern I’m noticing is that my blood sugar:

I’m nowhere near done testing.  This is very fascinating to me and I hope to learn a lot more about how certain foods work better or worse for me.

I’m very excited to soon take regular measurements during a long run to see how glucose levels fluctuate.   I’m also excited to see how certain foods affect my glucose levels differently.  I am a fan of Generation Ucan (it works well for me) and am curious to see any differences between it at regular gels considering their marketing focuses on maintaining level glucose levels while exercising.

That’s it for now.  If you’ve experimented with your blood glucose levels in relation to exercise, I’d love to hear your experience.  Of course diabetics will have vastly different needs and results, but I’m still interested to hear from them as well.

Feel free to leave a comment here or reply via social media.